I Am Fed Up with Bell Canada

At the end of April last spring, our area was hit with a major windstorm. The weather had been consistently rainy for some days before the storm, and the ground was saturated with water. During the storm two big pine trees on our road allowance were pulled up by the roots and deposited across the phone and hydro lines, breaking the lines and leaving us phoneless and in the dark.
Phoneless, because we live in a very rural area where there is no cell phone coverage. We have cell phones but we can't use them here. Well, if I stand on a kitchen chair by the back door and hold the phone over my head, I get a weak signal. Sometimes. We are the last house on both these lines and so the crews usually reach us quite late.
A neighbour phoned the outage in to Hydro and next day I drove the fifteen minutes to our local village where, if I park at the Town Hall, I get a signal. I tried to phone in our telephone outage, but because I was using my cell phone to make the call, I got the cell phone repair. God knows where the woman was who finally understood that I wanted to talk about my land line, but after a long wait while my cell phone battery got lower and lower, I finally reached a person who said that it would be repaired. Ah. 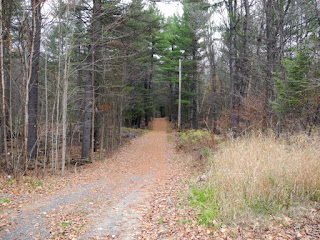 Meanwhile JG got out the tractor and the chainsaws and we cleared the trees off the road and the downed lines. The next day the huge hydro crane trucks appeared and put our power line back on the poles. Great service because the road dips just this side of the pole and the ground was pretty spongy. This is a photo of the road that, although it does not show the dip well, does show the location of the pole. The next pole is 90º left and on our land. Where I am standing is in the turning circle at the end of the township maintained piece and the trail you see is a gravelled strip put in by neighbours. 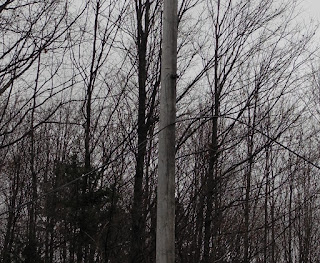 Here is the next to last pole. See the hydro line way up top?  The saggy thicker line below it is the telephone line. The Bell repair crews showed up just after the Hydro trucks but they decided not to take the heavy trucks up to the last pole because the road was too spongy and, in fairness, the Hydro crew had chewed it up quite a bit. What they did do was reconnect the switch box and lay the lines out along the ground. So, we had telephone service. We figured they would be back when the ground dried up but time passed and the crew never came back.
In spite of my repeated calls to Bell service, as of this writing, on November 2nd, the lines remain looped along the ground. Bell has sent someone out three times now, at my repeated and ever more urgent requests. Each time the someone has been a single technician in a van. Each time the technician promises to report it and send out the big trucks. This has never happened.
Here is what our telephone line looks like. 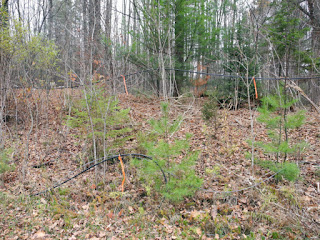 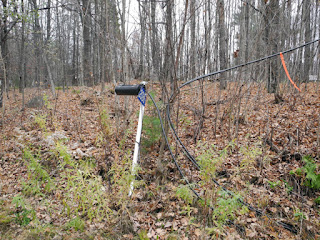 Lovely. The weight of the lines has now pulled our neighbour's civic address pole back far enough that it cannot be read. The line from it has been buried by the township road maintenance crew. And I figure that the first snowfall will bring the township plough to, at best, bury the lines for the winter and, at worst, tear the jury rig apart.

Leaving me standing on a kitchen chair, shouting, if I want to access the outside world. Or, I can drive into the village. Curses.