When I was a young woman, I wrote letters. My parents lived a day’s drive away and we kept in touch through letters and, usually, a weekly and expensive long-distance phone call. I worked part time but even with small children underfoot I made time to write. I needed the contact and knew that my parents needed the descriptions that kept them abreast of the development of the grandchildren that they deeply loved but all too seldom saw in person.

I wrote. With a pen, usually on notepaper although sometimes on whatever (usually three ring lined binder paper) that came to hand. I took care in the writing, both to keep it neat enough to read (mostly) and to keep the narrative interesting. And positive. In fact, the letters were not unlike the family blogs that many young mothers write now, but without, of course, the photographs. Photos were expensive, especially coloured ones, and were usually taken on ‘occasions’, labelled and sent infrequently.

My mother kept a lot of these letters. Here is a sample, a fairly short and innocuous one. (As I sorted through some of them to choose one to scan, I found far too many with content that should never hit a screen. Of which more later.) 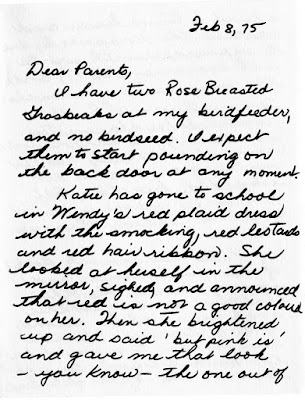 I was sitting at the kitchen table writing this, with the breakfast dishes either pushed aside or stacked in the sink. As of this date the ED, Katie, is 8 going for 9, and the YD, Wendy, is 7 ½. Katie’s hair was copper coloured but her sister was a brunette. Wendy was missing a front tooth. 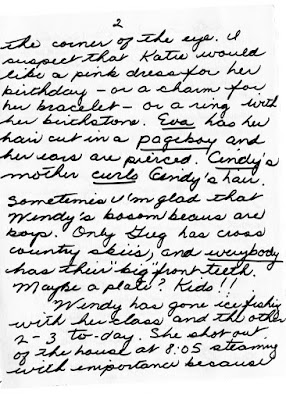 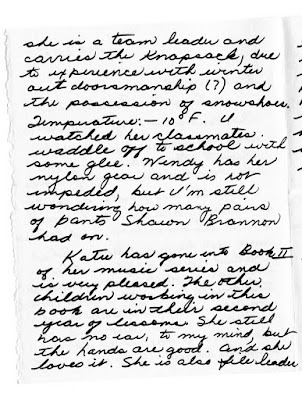 The year prior to this letter we had purchased an 100-acre piece of land, a combination of scrub (logged) bush and overgrown farm fields and built a cabin on it. We spent every weekend there, had snowmobiles and many trails and had equipped the daughters with very good quality winter snow gear. The music lessons were on the piano, a group lesson that was all I felt we could afford (see pricy snow gear above.) 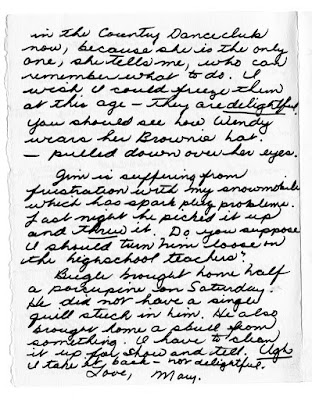 Bugle was our beagle. And the high school teachers were on strike.

This letter is rather shorter than my usual report to the parents – I guess because I was using note paper. And it is simply a report. In every letter there was a report, but I often wandered off into introspection or comments on the political scene or just plain rambling. Very much like a blog but with a very limited audience.

Just for fun, here is one more page, this one from 1979, the year Canada switched from imperial to metric measurement. 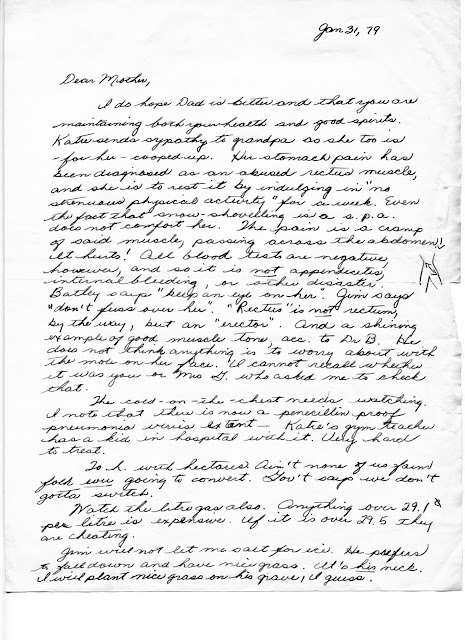 I wrote with a lined sheet underneath the plain one and that is why the writing does not straggle all over the place. Much. And the news is about the ED, who is now on a gymnastics team, having bunged herself up at practice, causing her mother to drive at illegal speeds to the gym, even more illegal speeds to the ER at our local hospital and …wait, with the poor kid writhing in pain, for an interminable time to see a bored intern. This activity was followed by a visit to our family doctor, Dr. Batley, who took the whole thing seriously. It is an indelible memory.

It was amusing to sort through some of these letters … all sorts of things I did not remember, among them one of JG’s relatives being arrested and one of my relatives having a total blow-up with the spouse. Sigh. I know that ‘the’ should have been ‘their’ spouse, but I cannot make myself do it.

These letters all live in file folders in the bottom of my filing cabinet and will, I am sure, annoy my daughters no end when they have to deal with them after I am dead and gone. There is also a fat file with their report cards, articles about them, and all that sort of stuff. Cannot bear not to have it. I take it out and look at it from time to time.

As I am sure my mother did with these.