A Day in the City

I have just renamed Little Stuff. Any kid who can climb twenty feet into a tree is not Little any more. I am presently referring to her as Herself, and hoping to come up with something better.

I am looking after the grandkid this weekend, her parents having to go to an event in Toronto. I have been at it for two days now, in fact, mostly getting Herself from place to place -- to school, to gym class, to shop for a Hallowe'en costume -- and allowing her to do all sorts of stuff that her very organized and structured mother would probably not allow. 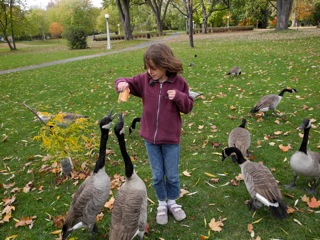 This afternoon we went to the park to feed the birds and get some fresh air. Boy, was the air ever fresh. There is half a gale blowing and the temperature is dropping and the wind keeps blowing in rain clouds. Anyway, the rain and the wind had a lot of birds on the ground and the feeding opportunities were good. Herself had brought along a loaf of French bread that had got a bit mouldy and it proved very popular. In fact, outside this circle of feeding geese was another of squawking, begging gulls. Herself refused to feed the gulls, saying that they were all spoiled. An occasional squirrel crept through the mass of honkers -- they did get fed and most of them will take a peanut from Herself's hand. 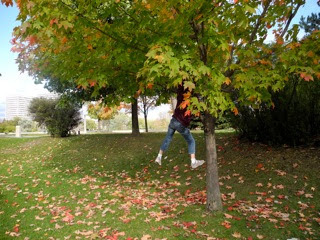 After she disposed of most of the edibles, Herself set out on a project that involved climbing all the scalable trees in one corner of the park. Her strength level is very high, and she can shimmy up a tree trunk of the appropriate size in no time at all. Then she swings up through the branches until she gets to the top of what will bear her weight, sits and admires the view for a bit and swings down again. On to the next tree and up she goes. She did this for the best part of an hour without showing any sign of tiring. (I took a lot of photos and may add more later but I am on the household Mac and the only way I can figure out how to shrink the photos is by emailing them to myself. So, later.) 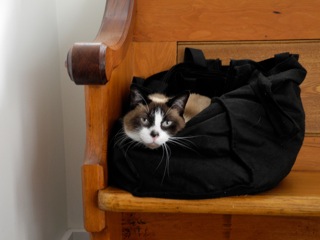 I can't resist adding one more shot, however. As well as minding the kid, the babysitter has to deal with a household full of animals. There is the tortoise who woke me up last night banging around in his habitat at midnight, there is Leo the lung fish, Charlotte Anne the guinea pig, Charmy the leopard gecko (belongs to Herself's brother, in truth, but when brother left for university, somehow Charmy stayed home.) and last, but by no means least, Miso. Who is a cat. Miso loves bags, of any sort. He loves my suitcase a lot, but I have learned to leave my door shut. This afternoon as we left for the park, this is where Miso was spending the afternoon.

He was still there when we got back, but sometime in the interim he had got out of the grocery bag pile long enough to throw up on the hall floor. Charlotte Anne's cage needs cleaning in the worst way. Luckily Leo and Charmy are self sustaining over one weekend. Charmy, when he has to be fed, requires live crickets dusted with vitamin powder. I am not sure what Leo requires, just that he does not need it very often.

Herself, on the other hand, requires a lot of stoking. She won a horrible sugary ring as a prize at her gym class and turned her mouth, teeth and tongue bright blue while consuming it. And the shop where we bought the bits and pieces for her costume gave her a loot bag as a bonus, a loot bag that contained a Hallowe'en themed noisemaker, the kind that unrolls and makes an unlovely blat. Herself has been blowing it. A lot.