The sixth age shifts
Into the lean and slipper'd pantaloon,
With spectacles on nose and pouch on side,
His youthful hose, well saved, a world too wide
For his shrunk shank; and his big manly voice,
Turning again toward childish treble, pipes
And whistles in his sound. Last scene of all,
That ends this strange eventful history,
Is second childishness and mere oblivion,
Sans teeth, sans eyes, sans taste, sans everything.

There is a landmark birthday coming up for me this week and, unlike my reaction at other landmark birthdays - 65, say, or 40 - the number is bothering me. I will be 70 and I identify that number as definitely old. Real old age. This is not making me happy: rather, it is making me grumpy, lethargic and disenchanted with all of the things I usually enjoy and plan for.

I am not sure why reaching this age is such a big deal for me. Possibly there is an echo from the fact that both my mother, her younger sister and my beloved sister-in-law were all fragile and unwell by that age. Possibly it's the 'three-score-and-ten' identifying line. Certainly the belief that this length is the allotted span of a life was part of the things I was taught as a child. Women acted old at seventy in the fifties. They dressed the part and tailored their activities to fit. When I was twelve my mother was a slim, fit 45 who played tennis, ran and was vigorously interested in everything. My grandmother was a small creature bundled in black who had no waist, no teeth, no stamina and no interest in much that I could see except tea and gossip. She was 68. In fairness, my grandfather died that year but my grandmother never recovered, never returned to any of the interests and skills I remember her having when I was a little girl, although she lived to be 93.

The boomer culture has changed that expectation and the image of seniors - we now have 'golden years' and 'zoomers' (!) and slim, fit white-haired couples on beaches, on golf courses and in Viagra advertisements, wrinkles airbrushed and mouths full of expensive implants. Frankly, I have been annoyed by the boomers and their culture all my life and see no reason to buy into the fantasy now. Being old is a fact, it comes to us all and no tummy-tuck, supplement or regime will prevent it. Certainly it comes at different ages and in different ways - I also had an aunt who, well preserved and well-corseted, played golf into her eighties, as well as a mother-in-law who was active and interested well past that age and who just had her 95th birthday.

I don't want to follow any of these examples, not the fifties' assumptions nor the sixties' never-grow-old euphoria. I would like to age 'gracefully', certainly. Who wouldn't. I have found that living through my sixties is like living in a 'heritage' home, rather than a new one. It takes a lot of upkeep and is certainly not provided with the latest and best wiring and insulation. But it can have grace and character, if you put the work and thought into it. That's the problem, though, as I think about it. I have to think about it. There is no part of me, external or internal, that remains low maintenance. From the thin white hair to the problem toe nails, the upkeep is a lot of work. Boring, unrewarding work that takes a lot of time. Alas for the fleeting joys of youth - or even middle age. 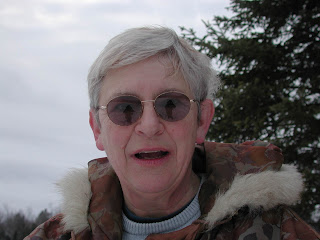 That's four paragraphs of whining and so, enough of that! I should be outside fertilizing lilies and retrieving topsoil for a new perennial bed. I should be working on this week's photo challenge, which is 'wind' with either a short or long 'i' according to glorious leader. I should maybe clean the kitchen counter, make the bed, put a load of laundry in, get on with the program. I need library books, the freezer needs organizing, the light-weight clothes, ditto. And I do not have to do all of this after eight hours of being gainfully employed. Nor am I full time custodian of either kid or dog. And I have my teeth, the use of all my limbs and a brain that can still be stimulated into something resembling intelligence by enough coffee.

And I have one chocolate truffle left in the box that the Easter Bunny (aka JG) left on my bedside table. So, I am going to be 70 in only a few days. Too bad, but the alternative is not attractive either.
Posted by MARY G at 12:26:00 pm