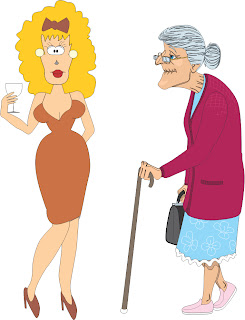 Note: this post is long and quote heavy. Beware.

In the last few days, two articles in the news have yanked my chain. The first is a report on a researchpaper that puts forward the theory that men's desire for young(er) women is the cause of menopause. I don't follow the reasoning. If you accept that menopause is a mutation that occurred in human women but not in other primates, I think the reasoning around the 'grandmother' theory makes more sense.

In the 'grandmother' theory, the hypothesis is that the beginning of the mutation meant that some older women were less likely to get pregnant and therefore did not die when other early human women died worn out by later life gestation. Such women would be useful to the family if they were skilled foragers and good caregivers. Their children would reap the benefits of extra food and child care and so would grandchildren, thus passing on the increased survival benefit and fixing the mutation. Simple explanation.

The reasoning given in Singh et al. ismore convoluted. As far as I can tell, the researchers started from the hypothesis that "Our model requires neither the initial assumption of a decline in older female fertility nor the effects of inclusive fitness through which older, non-reproducing women assist in the reproductive efforts of younger women. " They proved the hypothesis in a computer model. For me, their reasoning goes around in a loop in which mate selection preferring younger women allows time for mutation to produce 'senescent' changes in older women, making menopause an unfavourable choice. If so, then why did it persist? I guess I need to read the background studies. Sigh.

Certainly some of the effects of menopause are unpleasant, balancing off cessation of menstruation and danger of pregnancy against low estrogen effects of hair growth, loss of bone strength, skin changes and, according to studies, loss of libido in many women.

As I was pondering all of this, I read Margaret Wente's latest column, a discussion of the effects of big pharmaceutical companies' desire for profit causing their research to focus on creating needs where there should be none. She uses the search for a pill to increase female libido as the main example of this.

I really like her conclusions, much as I wanted to yell at her for her offhand comment that "Personally, I’m not sure whether it’s desirable, seemly or even (quite frankly) safe for senior citizens to copulate like jack rabbits." (Read that over when you're past seventy, Margaret, and you are going to cringe!)

The idea that 'There's a pill for that,' is something that, at my age, causes me both amusement and dismay. And never more so than in the area of lust. She quotes one researcher [Tamara Kayali, a post-doctoral research fellow at Dalhousie University who specializes in bioethics] as saying that "if a woman’s sexual appetite wanes in middle age, why is that her problem? “You’re assuming it’s the woman who needs fixing,” she says. “Maybe we need a pill for men that will lessen their desire for sex.” I love that thought. I would make such a pill mandatory for any man who requires his female compatriots to drape themselves in shapeless clothing so as not to be a distraction from important male things.

Lust, libido, sexual expectations and behaviour - a topic area that in my home in my childhood was pretty close to taboo. I got birds and bees type information from my mother, but when I asked her what intercourse felt like she answered that I would have to find that out for myself. And the closest I ever came to discussing the topic with my father was his somewhat strangled comment on the eve of my marriage that I had better not count on performance from my husband on my wedding night. None of my friends ever discussed sex. I first learned that there was a thing called a clitoris in my twenties. Books like 'The Joy of Sex' were a mid-life revelation; if such things existed earlier, I never found them. And I did look but all I found was fiction, written almost exclusively from the male point of view. (Discourage your curious daughter from reading Hemingway, is my advice!)

Following straight on from that snide aside, it is my experience that body image is vitally important in the whole libido thing, that it is almost exclusively shaped by culture and that it is as much an influence on males as it is on females. If you grow up in an era or a culture where your body type (facial features, hair and skin colour and texture included) is not the culturally admired one, you can very easily let yourself be influenced in some highly adverse ways. If, for example, a tall, broad shouldered, skinny and small breasted woman grows up in the height of the Marilyn-Monroe-as-ideal era, she may well end up believing that she are not desirable and persuade herself that sex is not very interesting. If a girl grows up in the Twiggy era, has an ectomorph* for an older sister but is herself curvy, taller and heavier, she can equally devalue herself. Or end up with a very limited range of men she considers attractive and that she thinks might be attracted to her. Equally a young man with a body flaw might well fix on the first young woman he finds who is not bothered by it, having believed that no woman would ever want him, without considering whether he and she were compatible in other ways.

Along with such every-day examples, we all read about people whose functioning is totally warped by attitudes to libido and the other sex. Rapists, kidnappers, sadistic guerilla warriors, pitiful misfits, silly kids whose experimentation, gone wildly wrong, destroys them - all these examples are the grist for the media mill. Note that I am not talking here about people per se who buy and sell sex. Marriage is, after all, a convention for the buying and selling of sex. Among other things that it is, of course. What I perceive as wrong is the devaluation of some sex trade workers and their clients, both of themselves and of those they engage, if the culture and their own experience teaches them to do so. It is so easy for this kind of misery to escalate into horrible violence. Examples are no further away than the Clifford Olson disaster.

Truly, I don't know which is worse, being raised sort of Victorian the way I was, and passing (I very much fear) some of the problems of that down to my own daughters or being raised in this second decade of the 21st century where the norms seem to indicate that anything goes but in actual fact punish a lot of behaviours.

Menopause is a disease? This is the start of the hypothesis of Singh et al. Lowered libido is a disease? No, say Wente's sources, arguing against what they think is becoming common thinking. Since I have lived through both pre and post pill eras and have watched the growing emergence of women in the workplace, in politics, in the arts, I see these attitudes as reactionary, the back swing of the pendulum. I understand the multiple and contradictory standards affecting women's behaviour, appearance and status as a strategy to maintain the attitude that women are not really people, fellow beings, but rather objects (I'm groping for concepts here), other. A woman without overt signs that she wishes to attract male lust is a frightening thing and must therefore be categorized as sick or weak.

Aside: I think a poor hot and hampered woman persuaded into a burkha becomes a walking signpost that she is a sexual object first. The fact that some women choose to wear restrictive and smothering clothing makes them fools. Or fooled Equally, I think that a woman sliding her butt in its inadequate skirt onto her blazing hot plastic car seat or courting frostbite in a cropped top and the same inadequate skirt in Ottawa in February is a fool and not nearly as sexy as she thinks she is. She has a lot more choices than most of the over-wrapped women; why do so many women with a lot of advantages dress uncomfortably and sometimes to their permanent harm (I am thinking stiletto heels here) when they don't have to? Maybe they, like the women who aver they love face veils, have their thinking distorted by their culture.

And, on a personal note - why does my beloved ten year old granddaughter want a bikini bathing suit? It's idiotic! The stupid things fall off kids, leave lots of skin exposed to sunburn and bug bites and look silly on a flat chest. But they sell like hot cakes. Growl.

I wonder why acceptance of people as people first, not male and female stereotypes, must be so difficult - for both sexes. Because until that acceptance happens, misplaced attitudes about libido will continue to warp and, in turn, damage our society and our selves.

*Ectomorphic: characterized by long and thin muscles/limbs and low fat storage; usually referred to as slim.
Posted by MARY G at 4:47:00 pm