A most skilled and amusing writer, Nance of the Deptof Nance, has taken up the challenge of a question meme for the month of March. I love what she is doing it and have decided to play along, sort of, starting a week late. The bolded lines are the questions from the meme. 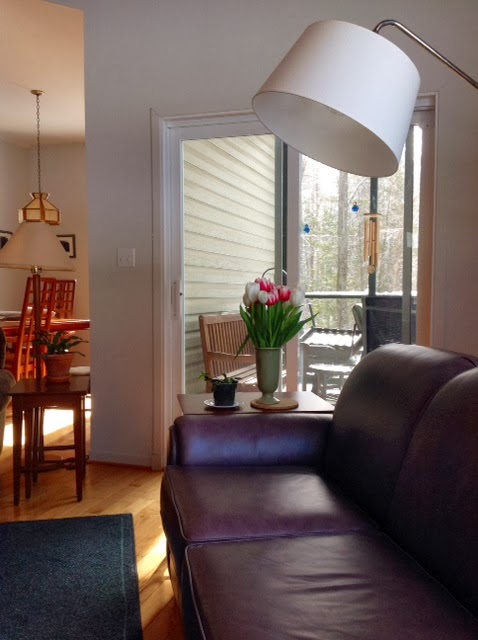 What is the view from the window of the room where you are currently sitting?
Here is the view; I am sitting in my wingback recliner with my iPad. What you cannot see is that outside, even though it is mildly sunny, fine snow is falling, glittering, catching the light.
There is nothing more cheering than a big vase of pink and white tulips poised against the snow beyond the windows.

Is there anything you don't or won't cook?
If I had any choice, I would not cook anything. After over fifty years of meal planning and preparation for my family I am tired of the whole thing. We are acquainted with a couple who eat three meals a day in restaurants: there are three reasons this would not work for me, alas. First, it is a fifteen minute drive to one restaurant and over half an hour to any others from where we live. Second, Even if we lived in town, the energy required to get dressed and go to a restaurant is almost as daunting as the thought of preparing yet another meal. Third, and definitive. The husband would not co-operate.
As for what I won’t cook; shellfish. Stinks.

Where is the one place you have lived that you remember most fondly and why?
My parents’ cottage on Lake Erie, east of Point Pelee. They bought it when I was eight and we spent whole summers there, with my father commuting to work, for many years. It was a big old wooden frame building with a full screened porch across the front and a fine sand beach. I had friends there to play with and a fair bit of freedom to bike the back roads and wander the beaches alone or with them.
The cottage sat on a triple lot, with vacant lots to either side. There were birds and clouds and wildflowers, water and wind, the undivided attention of  my mother when I wanted it, visits from all of the extended family, fresh perch from the fishery down the beach, fresh produce from the roadside stands and market at Leamington, a stray cat that adopted us, and unlimited unsupervised places to explore and savour.
I regret that my cousin and I went back to see what the old cottage was like, a few years ago. The cottage was still there, in renovated state. But the lovely beach and the woodlands were all gone, replaced by a crowded confusion of cottages and homes. And the water was thick with algae and offal.

Can you, along with Edith Piaf, say "Je ne regrette rien"?
I don’t regret the big choices. I have written about that in earlier posts (and if I ever find one or more of them I will add in links, not that you need to follow them but because I am like that). In your seventies, you can look back and see what your choices have made of you, and be content that you have done the best you could.
Little things are worthy of regret. I regret agreeing to meet my first love, a man to whom I was engaged for over a year, when we were both middle aged. It would have been better to keep, as I also did not do with my parents’ cottage, the unsullied memory. I regret procrastinating about many things and therefore not doing them well. I regret never bringing my French up to fluency level: it has never been more that classroom level. (Do you speak more than one language fluently?  If so, how did you learn it?)
It is no use regretting the loses that a long life brings. It is only necessary to summon up enough courage to live with them.

Have you heard the song Let It Go from the movie Frozen, and if so, do you like it. No, thank goodness.I don't need any more earworms.

Do you get regular mani/pedis?
Although I do not regret having spent a lot of my younger life in swimming pools (swimming is my only skill), it has brought me grief in the fact that fungus, from wet, contaminated dressing room floors, has infected my toenails. I spend more time and money that I like with podiatrists and cannot wear sandals or get a pedicure, ever, lest I infect others.
As for the fingernails, I did once get a manicure. Ouch.

Did you watch the Winter Olympics?  Which events did you enjoy seeing the most?
I love the skating. And this year, for the first time, I got to see it without interruptions or anchors or ads. The CBC streamed the coverage and from my iPad I could hook in, watch at my convenience, and pause and bookmark if I had to do something else.
The extreme skiing contests were more than mind boggling, although I did watch some of it. How those young people get up the courage to slide down railings and sail high in the air over immense jumps is beyond me. Nor can I really relate to eye-hand co-ordination that can place a rock less than an inch from a line to score, especially when it has to bump aside other rocks to do so. I have a friend who is a curling fanatic, but she has never been able to explain the fine points of the game in a way I could understand.
What I love about the Olympics is the emotion – the joy, the sorrow, the determination, the sheer improbability of what they do. What I do not love is the sheer improbability of some of the judging and refereeing (if that is a word?) and the way the medal scores for a country are hyped. It makes the words and tune of ‘Jingo is my name” play over and over in my soggy brain.

I think that I have now done most of the prompts and I will try to keep up for the rest of the meme. If I don't procrastinate too mcuh.
Posted by MARY G at 1:05:00 pm