Pretty in Pink - with Flowers 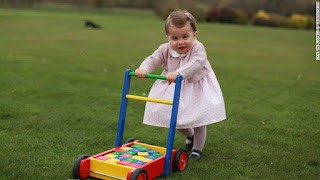 Above is a photograph of little Princess Charlotte on her first birthday, all dressed up in a full flowered frock and pale pink sweater, looking sweet and girlish and, so the pundits say, inspiring many mothers to dress their little girls the same way. Another blow struck for stereotyping, alas. It is easy to understand why she would be dressed this way because it is adorable and cute and easily saleable. One can only hope that after the photo shoot was over she was bundled out of the dress and into a pair of her brother’s outgrown overalls and a nice tough jacket and allowed to enjoy herself. Provided, of course, that her brother had play clothes and was ever allowed out of the sailor suit and shorts and ruffles that he was stuffed into for photographs at the same age.

Please do not misunderstand. I am not against shell pink and ruffles and lacy white tights on little girls. I (or more likely my mother) have dressed both my daughters and granddaughter in girly garments now and again. And they loved it. For dress up. But most of the time they wore (and still wear) practical garments in which they can move well and that wash and wear well. And for three generations of us, that translates to pants. (Or jeans or dungarees or whatever you want to call them.) Have you ever tried to crawl in a full skirted dress? Let alone wash the windows or walk down a ramp in a high wind? Right. Not easy. Not fun. Not practical.  Tough, practical clothing to put on right after the festive event is over is always my choice. (Um, just looked at myself dressed in my shell pink sweater. But I will change it for a bug shirt shortly.)

There used to be much more of a dress code when I was a young woman. Gloves, hats, stockings even in a Windsor summer, jeans allowed in the library only on Saturdays at my university. I am sure everyone has seen a ‘50’s advertisement for household goods featuring a housewife in a dress and frilly apron wearing a necklace and high heels while she cleans or cooks. Thank goodness no one is stereotyped into dressing like that any more. Men are still caught in the suit for business trap, but women and girls have a lot more freedom. I am daily grateful that my uniform of jeans and shirt or tee with a jacket or sweater when needed, and my old lady short, short hair, is accepted everywhere.

Or is it. Here is a woman who is uncomfortable walking into a woman’s washroom describing how she looks:
“I am female-bodied, but dress in a way that fits my own understanding of my gender identity which, while not male, definitely trends masculine. Dressed down, I wear jeans and oxford shirts with baseball caps. Dressed up, I prefer khakis and dress shirts. Bow ties are my favorite accessories. And my hair is cut short enough that my hairdresser charges me for a “men’s cut” because she doesn’t think I should have to pay more than a man for the same haircut.
Like I said, though, I’m not male. Unlike my trans brothers who have transitioned female-to-male, I have been clear that that was not the right path for me. I’m happy to be “Emily” and to live in my body. How I dress and carry that body, though, is often at stark contrast with what the world expects. It’s been that way since I was a 3-year-old telling my mom that overalls were better than dresses.”

Except that I would have a scarf rather than a bow tie, she could have been describing me. And a horde of other women.


I have never noticed anyone giving me the glare in a public washroom. I am tall and heavy boned and I have been taken for male over and over through the years (much to my amusement, mostly) but never challenged in a washroom. Am I just oblivious, or is ‘Emily’ seeing shadows where they do not really exist. It is sad that she is uncomfortable.

It is even sadder that people with minds like sewers are trying to make us all overly conscious of who is
Posted by MARY G at 12:43:00 pm