Mad as a March Hare 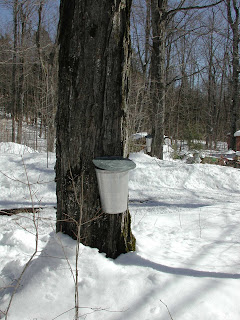 It's been a long day. This morning the local maple syrup producers had the annual 'Tapping Out Party'. For those of you not from Eastern Ontario, this is an event to celebrate the start of the maple syrup season and is held around here on the Thursday of March Break. It's a kid oriented event, with clowns and fiddle music and step dancing and some local celebrity who is given a brace and bit, drills a hole into a sugar maple tree, taps in a 'spile' (a slanted spout) and hangs a bucket on it.
This year the weather was cold, with a piercing wind, and those of us who were managing tables outside got just a bit chilly. I got spelled off at noon, by which time I could not feel my feet. It is, however, a wonderful spot for kid watching. Hordes of little folk attended, all bundled into puffy snow suits, scarfed and mittened until what you saw was two eyes peering out of a bundle of wool and Goretex with small boots thumping along at the bottom. There was ice carving, a bunch of wooden toys to play with and, best of all, maple taffy which is made by boiling syrup to the 'hard ball' stage (258ºF+), pouring a strip of it onto the snow and, as it cools, winding it onto a stick.

Sometimes the party organisers charge for this treat, which restricts the sugar intake somewhat, but this year it was free and the girls who were pouring and winding were being generous with the servings. The result, as you can well imagine, was a bunch of animated snowsuits whose inhabitants were all on a sugar high. There were taffy treats stuck to scarves, mittens, noses and mommy's coat. The little faces were joyously dripping with melted maple sugar. Safely barricaded behind my table I watched it all with great pleasure, but the parents who have to do the clean up job have all my sympathy.
Posted by MARY G at 11:48:00 pm

Labels: On where I live