It's raining again. Ten minutes ago I was sitting out on the screened porch watching the cloud shadows chase across the back field. Noticing yet another big black mass moving up from the west. Feeling the gust of wind come around from behind me -- the cool, brusque push of wind that precedes the rain. This pattern of sun, rain and sun again has persisted all day. And yesterday. And the day before that. With interludes of electrical storms. The farmers struggling to get the late hay baled must be apoplectic. Anyone who has booked this week off as vacation is probably fed up and growing moss between their toes. Or last week. Our July weather this year has followed this pattern almost every day.

We did get out in the boat for half a day, yesterday, before the cloudless sky began to fill with far from innocent looking clouds and we had to trailer the boat fast and head for home. It was gusty on the lakes and so we anchored in the lee of a small island to eat our lunch. Almost immediately an osprey swooped just over our heads and when we looked up we saw another one. They are beautiful soaring birds, about the size of a raven, and they fish. We watched one of them swoop over to the island and realized that there was a nest on one of the bigger trees -- a live tree and not the tallest one, which ospreys usually prefer.

We were also amused by a swim-by parade of Canada geese, a long one composed of adults and almost adult sized juveniles, that headed out into the main channel and, paddling with amazing speed, crossed the fairway among the passing boats. Earlier this week we saw a pair of loons with two very small chicks bobbing between them and another family with two or three bigger juvenile birds. They are also a big bird, when you see them close by, as we often do. They are usually quite calm about passing boat traffic and will only dive away if something passes really close to them. Last fall we saw big flocks of them congregated in the upper part of the lake where the water is shallower, as many as twenty birds in one group. I was not aware they did this.

For me, this is the joy of boating. We putt along quite slowly, field glasses at the ready, on weekdays or before the cottage season is in full swing and after most people have left. In spite of the lake shores being almost entirely built up with cottages, there is a lot of bird life and more than occasional glimpses of the local wildlife. Mind you some of the local wildlife of another sort can be out roaring around in circles towing screaming kids on inflatables, or jumping wakes with their Seadoos. Not enough to spoil things, though. And we pass placid fishermen (I refuse to use the politically correct 'fisher' - yuck!) rocking quietly in the shallows or trolling gently. The fishing is quite good, and my family loves to fish.

In fact, here are three generations of my family fishing -- there's none of me, or it would be four. 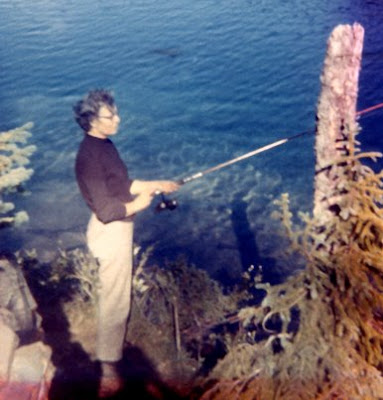 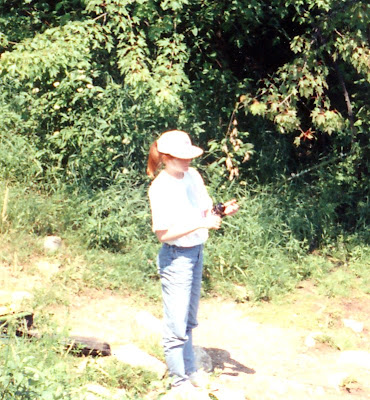 I'm not really into fishing. I have served my time taking sunfish off hooks and returning them to the water, threading worms onto hooks, cooking fish brought home by the successful, cleaning up. I even have several videos of me, swimming with and feeding fish. But if I get to sit down beside water, what I want in my hand is a camera or a paintbrush or binoculars. If I have a camera, I take bird pictures. And more bird pictures. I am about to put the white heron back onto the top picture. If I have a paintbrush I make yet another attempt to capture what the water looks like: the result is never to my satisfaction, but I can't resist another try. The binoculars are often a prelude to activities one and two.

I love water. Only, a large dollop of it has just fallen on my sheets, which I optimistically hung on the line a couple of hours ago. I'm not so sure I love that.
Posted by MARY G at 6:17:00 pm

Labels: birds, granddaughter, On where I live, photos