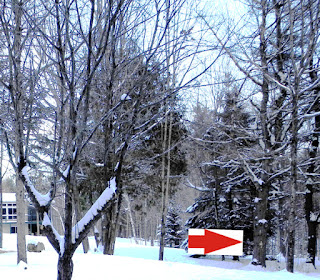 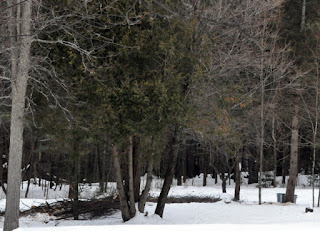 The branches left after the trunk was tractored away. 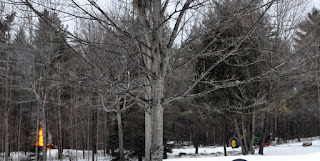 199/365  Fire bug.  Note tractor and JG to the right, scavenging more branches to put on the pyre.

A few days ago JG cut out a very tall and bushy (open grown) dead white pine. He tractored away the main part of the trunk but left a huge pile of dead pine branches across the back of the field behind the house . I suggested that we build a pile off the maintained grass and set fire to it before the end of the free fire period.This worked so well (photo #3) that he has since cut down two more moribund trees and made lovely bonfires of the lot.

The house has a lot of flowers in it today. A Christmas gift to me was a thing called a 'plantcam'.  I was also given an amaryllis, and tried out my new toy with it, only to find that the wretched thing moved about so much on its stalk through the day, seeking light, that it bobbed in and out of camera range. What I needed, I thought, was a pot of tulip bulbs. Unfortunately, at this point the temperature dropped into the -20º C range and stayed there. I was afraid to try to get a flower from the store to the car to the house. Last week the temperature moderated, I got a pot of fine, deep pink budded tulips, and set up shop.

Only to set the camera wrong somehow. Instead of a 15 minute time lapse video, I got a series of 15 second videos. If I can figure out how to combine them, the result might be interesting. In the meantime, I am enjoying the stills. Somewhat grainy, though, and I am not sure why as I had the plant in front of the big front window facing south west. Ah well, back to the drawing board. 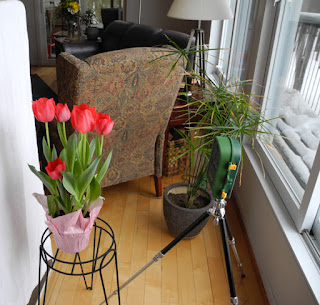 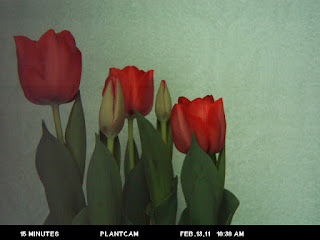 First shot in the series 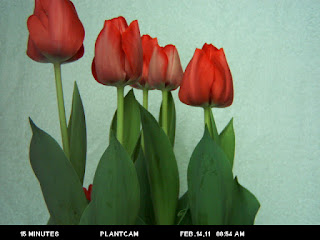 Second shot, end of first day.  Note that sneaky bloom on the left is creeping out of camera range. 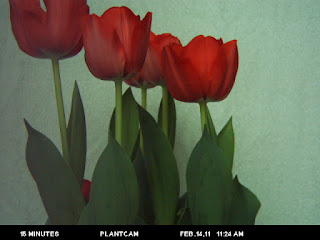 Last shot.  Left bulb still reaching for the sky.  In fact, it looks as if I moved the camera closer, but I don't have any memory of doing so.