Wearing several hats at once. 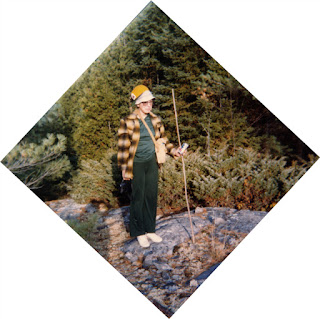 One of my favourite amazing bloggers is bon over at Crib Chronicles. She has lately written a post about buying recreational land and the impulse to live a life of self-sufficiency. I started to write a comment about this post but, when I had reached about the one hundredth word mark, realized that what I should be writing was a post of my own. So, please go and read her post about almost buying a cottage. You'll love the writing and be fascinated by her topic. And I will add my bit to the discussion.

When you buy a hundred acre piece of vacant land, it can take over your life. It took over ours.

Our early years as a married couple were a mad scramble as we variously coped with doctoral dissertation, two babies in fifteen months, frequent moves and not enough money. Once JG finished his post doc, however, and settled into a permanent job, once the kids both started school, things, especially our finances, became smoother. And we decided that while a suburb was a fine place to raise and school young children, it was also noisy, crowded and nerve racking. We decided to buy recreational land.

Our first few investigations told us that a cottage on water in our price range came with even more noise, crowding and nervous tension. We started to look for a peaceful place, hopefully with access to water, where we could spend weekends. What we found was a hundred acre plot that had been settled and farmed in the nineteenth century but that latterly had returned to scrub bush. At the end of a rutted track on a dead end road, it was a perfect hideout.

My father, an avid consumer of survival fiction, worried from time to time about how his precious grandchildren would survive come Armageddon. He helped us buy this piece of land, and encouraged me to teach the girls subsistence farming, archery, self defence, all the skills he thought necessary for living through cataclysmic times. My husband was far more concerned with building an insulated cabin for all year weekending, taming the overgrown field and bush, killing marauding porcupines and exploring every nook and cranny of our new-found possession.

We did get books about surviving in the bush, we made (awful) soap and tried boiling down maple sap à la our pioneer ancestors. I tried gardening, but the competition with deer, coons, rodents and birds, on a two-day-a-week basis, was just too aggravating and I continued to keep my kitchen garden in the back yard of our city house. An electric fence, large dogs and a good aim with a twenty-two are the kind of help back woods gardeners need. Living off the land? While cat tail roots may be nourishing, they taste terrible. I was never inspired to see if porcupines were any tastier.

What did happen is that our daughters became very proficient at finding their way through the rocks, hills and swamps, learned to snowshoe and cross-country ski, charmed chickadees to their hands with sunflower seeds and, by helping with JG's various building projects, became competent carpenters. This was some comfort to my father. Later, my land happy husband acquired two hundred more acres of scrub bush, we became maple syrup makers and when he, a research scientist, got an early buyout from his federal government employer, we moved to this land permanently and built a home here. My grown daughters love it here for recreation and peace. I feed the deer and do not compete with them and live in gardenless tranquillity.

It was sometimes difficult, living five days in the city with part time job, two kids, dog and husband (um, not in that order), two days on the land, fitting all the city work into the four evenings, keeping two kitchens stocked, two houses clean and repaired, working with the woodsman husband long hours in the bush, cutting and stacking cabin stove and sugar camp evaporator wood, getting ready for the sugaring season, enduring the long hours of boiling, bottling, checking the lines in the bush for leaks plodding along through deep, soggy snow on snowshoes, lugging the equipment. Twice a week packing, travel out and back, arrange the children/teenagers' lessons and social life around two day absence from their milieux, keeping track of it all, could be frustrating, onerous.

We have friends who made the break complete, moved entirely into rural mode, grew food, raised their children there. Gradually they have adopted some amenities, buy more of what they need, made things easier. We have friends who have always lived here who seize on any and every labour saving device to make farm living smoother (theirs is the garden with the electric fence and all that, a garden where I weed in exchange for produce.) We have retired to 'the bush', and that is somewhat different. I shop in the nearest town for most of our food needs, and while JG happily lives a forest manager's life, I spend my time doing what my interests and age suggest to me, volunteering, reading and writing and photography, the minimum of housework. I no longer help in the bush - my joints and back are too vulnerable and, in truth, I'm not that fond of hoiking pieces of tree around.

As a young wife and mother I did what I had to do. I put myself at the end of every list for twenty years of child raising and for several more of housebuilding so that we could live comfortably here. I am now nurturing, slowly and carefully, my sense of self and my autonomy.

In the end, you see, the land and the dream have taken over only as much of our lives as we allow.
Posted by MARY G at 3:11:00 pm

Labels: about me (be warned), on my family, On where I live, role of women