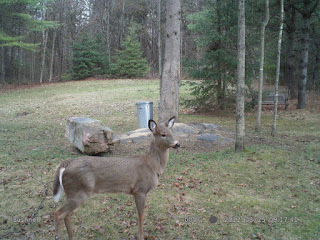 This is the latest capture from the Trail Cam - a last year's fawn posing most beautifully. This shot also reminds me that it is time to move the feed cans to the shed before a black bear comes along, rips the lids off and overdoses on corn.

It's a cold, blustery typical late March day, quite a come-down after last week's halcyon weather. I feel that I should be out wrapping little scarves around the neck of each too-early daffodil bud. The robins who were running the lawn last week are huddled, disconsolate and braced against the wind. The YD's dog however, is out surveying her domain, snug and smug in her winter coat, decorated with raspberry canes and muddy leaves.

I have just paged through the morning paper, second coffee in hand, and am bemused by some of the political articles therein. An MP (Member of Parliament) has been removed from a committee for sleeping through a presentation to it. MP Justin Trudeau (PET light) is posing in trunks to publicize a charity boxing match set up with a Senator whose arm is a mass of tattoos - and muscle. Justin may get his already messy hair further mussed. Newt Gingrich is running out of campaign money but promising to stay in the campaign and I cannot imagine what he hopes to gain except huge debt. A strange man - a plausible, fluent speaker without any discernible self-discipline. Are all politicians egos on two flat feet, or am I unusually cranky this morning. Maybe a third cup of coffee?

I went shopping yesterday and bought five pair of trousers to replace the ones presently in my closet that are all one or two sizes too big. I've been on a bit of a weight loss campaign and am now balanced on the size cusp between one size is sloppy and the next one down is almost too tight. I figure that wearing the almost-too-tight stuff will motivate me to lose a few more inches of flab off the butt and waist. I hope. A better motivator would be to get rid of all the this-size-is-sloppy garments and be faced with the choice of eat less or go around in my undies. And they also need replacing, trusty white cotton baggies that they are. Luckily our local store had a whole rack of stuff on sale yesterday.

I came home from this expedition exhausted. I've never been much of a fan of clothes shopping, frankly, and the older and crankier I get, the more I don't enjoy it. I have also had to shop for a dress to wear to a family wedding coming up this weekend. The styles in the shops just now strike me as terminally ugly. Skirts above the knee ( I did this in the sixties but never again), ruffles, asymmetrical hemlines, drapes of fabric across the bust and belly, all presented in slinky, wild-coloured knits or dismal shades of grey. I did find a nice sheath dress in a handsome shade of turquoise, but there was only one left and it was a size I could not wear. So, I have a skirt and top in wild colours that caused my poor husband to blink and visibly swallow his comment. It is faintly slinky, too, since it is the almost-too-tight size. At least I have shoes I can wear with it. And I hope not to be in another clothing store until fall.

The wonderful taste of spring we had last week has been a horrible blow to the maple syrup producers in our neighbourhood. By rights this should be the height of their season, but the trees budded out too early in the heat and most of them got only one or two really good days of sap production. My closest neighbours have twenty percent of what they usually make and, since the maple products produce the bulk of their income, are facing a year of financial stress. Or, rather, of more than usual financial stress. The farmers of all sorts in this part of the world have had bad weather conditions, low prices for their crops and high production costs for the last decade, mostly. They are not doing at all well and need regular assistance from government to survive at all. Under the present austerity measures just imposed by our deeply indebted province, and the ones expected from the federal government today, I am very afraid that a lot of them will go under. And when they do we will all be a lot poorer, as well as eating food imported from the agri-giants.

There had better be no Members of Parliament sleeping through this budget or too battered by a better boxer to listen.