In which my grandmother's china goes to a party

It may have come to your attention (on the several occasions when I have whinged about it) that I do a lot of volunteering. In fact, I have cut back the number of things I volunteer for in latter years and am now mostly involved with only two organizations. But last night I was working a one-off; a variety night, auction and dessert party to raise money for the Cancer Society. We who were suckered into being hostesses were asked to set a table for eight people, make desserts for them, provide them with snacks and drinks during the auction and serve them the dessert and tea and coffee after the program was over.

This event happens at a local golf club so we all have to haul the table settings, food and serving dishes into the dining room there, set it up, run home and change into fancy clothes and run 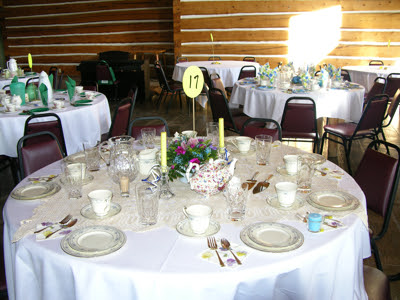 back to be issued with a daffodil corsage and greet our guests. There is tacit competition over how nifty your table looks. A fancy table setup involves lugging, in my case, four plastic bins of china, silver, food and flowers int 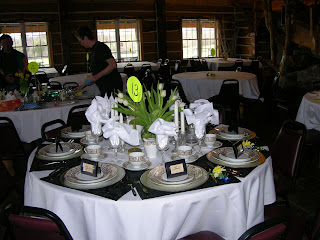 o the dining room. Some people (those with tame husbands to carry for them, mostly) get even fancier and arrive with coolers, punch bowls and other paraphernalia. I use my grandmother's Limoges and my mother's silver plate and real flowers, but I do not rise to cloth napkins and placemats or to shrimp rings and fruit kabobs. I think I'm about in the middle. I am also not a creative cook and so my guests get pies plopped onto a plain plate, not three layer cake confections in presentation mode.
This is my table. 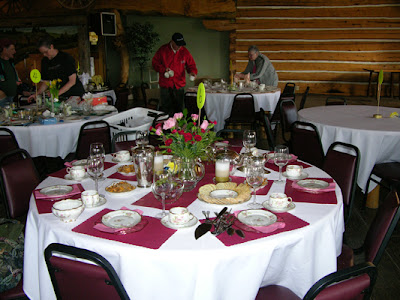 Almost all of us working this event are old and older retired folk. As are most of the volunteers I work with in all my volunteer activities. The same people appear over and over -- the Cancer society volunteers overlap with the Community Health Centre volunteers and the Hall committee volunteers. This is not one bit surprising: this kind of volunteer activity does not mix with working. What concerns me is that there is not an intake of newly retired boomers joining in to replace some of the 80+ crowd who really can't do a lot any more. At 65 I am one of the youngest members of all the organizations I work in. I've been on the CHC board for eleven years and there are only two board members younger than I am if you except the Baptist and United Church ministers who are there ex officio. When my peer group becomes too crocked up to be active participants, there may not be people who want to replace us.

All my life I have had the biggest bulge of the boomer generation, those born from'45 onwards, thundering along behind me. At each stage of my life, things seemed to change rather drastically a few years later when the boomers took over. An example: in 1960 women at my university obeyed (mostly) such stultifying rules as the banning of wearing jeans in the library and a 10:00 pm curfew in residence and did not question them; in 1969 there was a 'radical' campus political sit in at Sir George Williams (Concordia) that would have been unimaginable even five years earlier.

Those of you who are 40+ just qualify as the tail end of this 'generation' and your life experience has been very different from mine. Those of you who are younger yet (Gen X, etc.) have inherited a social climate that has built on that. I think you take part in such things as runs for charity, are environmental and social activists and are far more vocal and confrontational than my lot (I except people like Ann Cools and June Callwood) would ever dream of being. But you don't join the boards I find interesting, or take on the nitty gritty community activities that keep the wheels turning.
I have some fairly facile observations about why this should be. For one thing, a lot of you manage careers (as opposed to jobs) that you have been extensively and expensively trained for and which require a huge commitment of time and energy. You are having your children later -- mine were in school by the time I was thirty. You're a lot more mobile -- many of you live far away from the extended family that could help with child care and you may move from city to city, making your concept of community different and probably more diffuse. In Canada, the concept of what the state does and what the individual does has shifted a lot since the 1950's, and we pay high taxes to allow the 'welfare' state to manage issues like homelessness that used to be tackled only by private and church charities. More than that, 'charity' has become a four letter word. And that is just as well, I think. The 1950's were a lot more like the early decades of the 20th century than they are like the first decade of the 21st.

All in all, I think these differences are a good thing. The first half of the 20th century was paternalistic, short sighted (well, two world wars and the big depression took a lot of energy), conservative and timid. My high school curriculum , '55 to '60, had not changed at all from my parents', 1925 to 1930. My mother, with an MA, was a lonely little petunia. When she and my father were married in 1940, she was required to quit her job since her company did not employ married women. My school board requested my resignation when I got pregnant (oops!) in 1965. Customs like this gave us lots of time to volunteer for things. If you are like my daughters, you can't even really imagine that world, even though you still face barriers, misogynist attitudes and glass ceilings.
I look forward with eager anticipation to see what the boomer generation and following are going to make of their retirement years. The kind of stuff I do may just evaporate, but what will come to take its place will surely be more dynamic and probably more macrofocused. ('Is that a real word,' she asks herself. And Googles it to find out. And finds an article relevant to the point she was making two paragraphs up. Love this century!) I am like a kid in a candy shop as I surf around the community of bloggers I have found here -- you are articulate, caring and funny and you make me feel that the world is a better place than I thought it was and that it is in good hands.
Posted by MARY G at 12:41:00 pm