This is my version of Andrea's Monday Mission. It must have been Meant. Take a look at some of the other MM's at Write about Here, Mad Hatter's 'Show and Ah Hell, it's Pell Mell, and Flutter's Light. 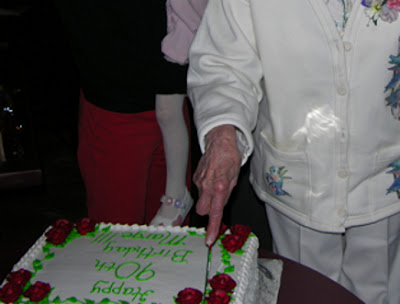 Marge/Mom/Nana is having a party for her ninetieth birthday. The family is planning to gather in a private room at the back of a local restaurant at 6:00 pm to enjoy a buffet dinner at 6:30. The daughter and son who live locally have arranged for this and the other son and his wife, the grandchildren and great grandchildren are coming variously from Toronto and eastern Ontario. The eastern contingent were all going to drive but one of the granddaughters is coming off two consecutive eight hour flights from overseas and won't get home in time to do that. She and her sister will fly on the morning of the party, rent a car at the airport and barrel down the QE to the small town where their Nana lives.

At 2:00 pm Mom's daughter phones her sister-in-law to find out if her daughters have arrived and to ask, "Would you go over to the restaurant and check that the flowers have got there and that there will be enough food and that everything is nice?" SIL drives over but the restaurant isn't open yet. She phones back with this news and the reassurance that, in the interval, the errant granddaughters have arrived. SIL drives back to the restaurant at 4:00 when it opens and positions the big bunches of pink flowers and an unruly bunch of helium balloons that the hellions have purchased en route. The buffet table looks laden. She phones back again with this reassurance. Daughter says 'Oh, good.' There is a lot of noise in the background. Another contingent of grandchildren has obviously made it from Toronto.

At 5:00 Marge/Mom/Nana is ready to go, dressed in white with sparkly pink trim. She and the resident son clamber into the car, which has not been washed, much to her dismay, and go to pick up her late husband's cousin. The cousin has a new digital camera and, at almost eighty, is chattering about learning to use it. They are first at the restaurant but groups of children, grandchildren and great grandchildren arrive almost simultaneously. The eldest great granddaughter pins a pink corsage onto her Nana's jacket. There is a lot of hugging, but the corsage remains intact. The noise levels are rising.

At 6:30 elder son starts herding people into sitting down at the big round tables. He announces that all the granddaughters will sit with Nana. That, with the addition of the youngest great granddaughter who is clinging to her mother like a limpet, fills one table. The elder offspring, plus some grandson-in-laws (grandsons-in-law?) are directed to a second table, and the lone great grandson-in-law plus an escaped GIL and the rest of the great grands fill a third. An opulent buffet is consumed with much chatter. The youngest great granddaughter asks for a second helping of beef, which her mother announces as an Event.

After even the sixteen year old great grandson has stopped returning to the buffet, the Cutting of the Cake is announced. Son, daughter-in-law, grandson-in-law and the octogenarian cousin leap to their feet and grab their cameras. Marge/Mom/Nana has a server thrust into her hand and the flashes start to go off. The whole family crowds in behind. Then the elder son starts marshalling people into categories. 'All the granddaughters,' he cries. More flashes. "Mom, look this way." "Smile, Nana!" "All the great grandchildren." More flashes. More demands.

Tall and slim, taller than all but the great granddaughter in 3 1/2 inch heels, Marje/Mom/Nana stands very erect in the midst of a kaleidoscope of variegated offspring. One of the granddaughters notices that the DIL is photographing, not posing, and grabs the camera away, shoving her into the picture. 'Smile, Mom." 'Look this way, Nan." "Look up, Mom." "I want to take another one, kids. Stay there." "Nana, look over here." When all the photos have been taken, the DIL and the eldest great granddaughters move in to cut and distribute the cake.

Marge/Mom/Nana looks down. She has not just been posing with the knife. With every new shot, she has cut another slice across the whole slab, and it is now almost entirely sliced. The first slices are generously wide but they get progressively narrower and the last few are almost ribbon thin.

Labels: on my family, photos, writing