This was going to be a thoughtful New Year's post, but then the ED sent me some photos and I can't let this one go by without sharing. 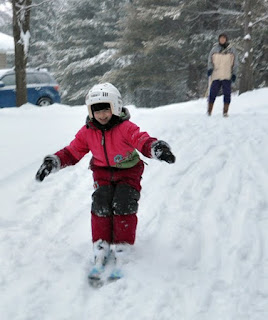 Little Stuff got skis for Christmas.  She and her parents came out from the city for New Year's Day (lamb and Crême Brûlé prepared by YD and yes it was amazing) and she tried out her skis on the laneway.  Which curves.  Daddy and Grama stationed themselves on the edge to take photos; Mummy was acting as a ski lift.  On one pass, Little Stuff hurtled by, missing Grama by milimetres. 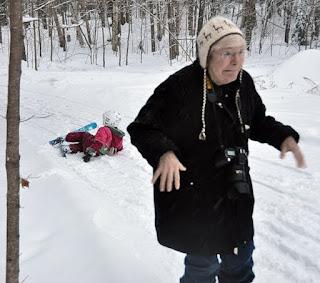 Grama was, understandably, a bit shook up. Because while Grama would recover from impact, she is not sure her Nikon would. (In fact, I am signalling a near miss to Daddy, but it surely is as funny a photo of me as I have ever seen.) 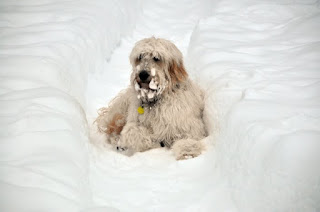 The YD's furry baby has discovered a world of little animals living under the snow.  She has not caught one yet, but not for lack of trying.
Posted by MARY G at 11:09:00 pm

Labels: about me (be warned), on my family, On where I live