Playing In the Middle 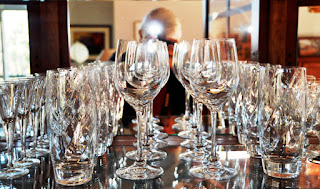 184/365.
This is one of the shots I took for the 365 project a while back.  it was bland and uninteresting but has become a lot more fun with the contrast enhanced and the gamma twiddled.  (How professional I do sound, I don't think.)  It was, though, supposed to be shot right down the gap between the red wine glasses and I blew that.  So, 'not in the middle' might be the better title.

I use Corel's PhotoPaint to edit photographs.  It is an immensely complicated program and I have never mastered all of its features, but it is a lot of fun.  The rose I have just put in as the blog title photo has been altered with one of the 'Effect' choices in PP.... it's called 'ZigZag', for obvious reasons.  You can also choose to apply the effect of a conté crayon or watercolour or many other artistic choices, or make the surface look like bubbles or stained glass, and on and on. I can play for hours, alas.

A while back I was whinging about organizing my photos.  I picked up a copy of Corel PaintShop Photo 2010, but I'm not impressed with it.  Too complicated and some of the features are not obvious (like applying tags.  Ggggrrrrr).  A couple of days later I was poking around in Blogger where I was offered a free download of Version 3.8.0 of Picassa 3.  The download only took a few minutes and when I activated it I found the best picture sorter I have ever seen - at least, for my purposes.  Unlike PaintShop Photo, you are not stuck with using trays (although you can), the red eye fixer is stellar and, best of all, the program organizes photo folders by date taken but also retaining the label I gave to the folder when I created it.  This mirrors the way I think, unlike the Adobe organization tree that doesn't, and I find it fantastically easy to use.

It also cranked up all on its own (a bit disconcerting) and did face recognition on all my photos, with an easy to use labelling system for the faces.  Excellent quality recognition, best I have ever seen.  Once this was finished, the result gave me a good indication of how many doubles (and triples and quadruples) I have among my picture folders.  And what a lot of photos of my grand daughter's smiling face I do have.  Best of all, if you double click on any thumbnail, an option comes up that allows you to identify the exact folder where the thumbnail originated.

This software is so easy to use that I am now gearing up and sorting and cleaning up all (almost 1000) photos I took on our trip out west last spring.  I am doing the flowers first, and am going to use some of the edited shots as 365 material, since editing and labelling can be a big part of photography. 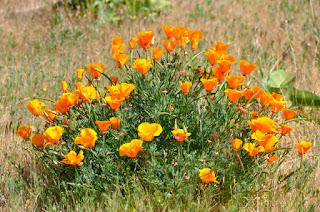 185/365  This is a shot of a bunch of California poppies taken last May not in California (although we were there) but in a park along the Columbia River in Oregon.  The flowers were ubiquious throughout our drive along the coast and they are spectacular.  This one was in the middle of an island in the road into the park.  The rest of the grass had not greened up around them but there they were and aren't they glorious.  Contrast enhanced and cropped.
Posted by MARY G at 9:32:00 pm