Last week her mother and I took Little Stuff shopping for her own clothes, a rite of passage because she will turn four in a few weeks. Her first pick was a pale purple sweater, very light mauve in fact. At a second store we visited I spotted a pair of trousers in exactly the same shade and her mother, although dubious, was persuaded to add them to the pile. They were a very trendy pair of pants, with cargo pockets and fold up hems.

Of course, Little Stuff had to wear all her new clothes as soon as possible. In fact she woke her father up the next morning at 6:00 am to admire the new pjs that were part of the swag. And for daycare she chose the purple outfit. After all, the sweater was the first thing she had taken from the rack her very own self.

That afternoon at daycare, during the painting time, her caregiver noticed that Little Stuff had disappeared. She was tracked down to the washroom where, in her undies, she was sadly rinsing out her beautiful new pants on which a large pot of turquoise paint had been spilled by her best friend. She had even got some of it out, but the cargo pockets and foldovers had retained a lot of turquoise. Her mother reports that it took a lot of washing to remove the rest of the evidence, but that the pants are now almost like new and Little Stuff has been restored to cheerfulness.

On Saturday her father took her out and bought her new runners, sandals and a nifty pair of 'Mary Janes'. I can only hope that the Ladybugs are not using pot paint this week.

Her mother's report of this incident amused me highly, as mother herself was some persnickety about her clothes as a little girl. She was a slim, light boned wisp of a kid whose younger sister 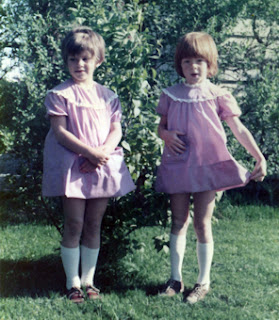 matched her in size by age five and from then on was always a size ahead of her. Because of this it was she who got the hand-me-downs. And if younger sister had a tee or blouse that she especially liked, she rode herd on the YS's care of the garment quite sternly. ('Be careful with the catsup' she would say. ' I like that shirt and I don't want it to be stained when I get it.' )
Here are the two of them at the same size stage, wearing new dresses made by their grandmother. Note the size of the hems -- my mother always liked to give them room to grow. And there were matching bloomers underneath. Miss Clothes Conscious is on the right here. Soon after this she asked her grandmother, very nicely, not to make both dresses in the same colour, as she would then not have to wear it twice.
Funny about the changes that happen as a kid grows up and the things that stay the same. Although the YS has turned from oblivious into a bit of a clothes maven as an adult, the elder sister has remained very neat and a bit obsessive. Her tee and socks always match or co-ordinate, and her shoes tone in. Her trousers and skirts have always had to fit just perfectly -- which made shopping with her as a young adult a marathon that I dodged, if possible. You would find me in the food court sucking back a large coffee and waiting. And waiting. It rather pleases me that Little Stuff, when confronted with her first opportunities to choose, liked most of what we deemed appropriate and did not dither. And did not allow mommy to dither. Although we did manage to tour every children's clothing store in a three story shopping mall.
Posted by MARY G at 1:50:00 pm