I can't remember when I didn't know that my mother was unhappy. I think she was bored and mourned the waste of her education and skills, but believed it was not appropriate to break out of the mould as unusual behaviour on her part would have done damage to my father's reputation and thus to his livelihood. She 'had everything a woman could want', didn't she - a good home, a husband who was a good provider and a serious man, a child. Maybe she would have been more fully occupied with more children, but my delivery had been botched and she did not conceive again. I became her full time project. I was to be healthy and happy and free, in a way she thought she could never be again.

Don't misunderstand, please. I loved my mother dearly. But from and early age I knew, at first almost from instinct, that to help her cope I had to do well in school, do well in sports and activities, be polite and charming and sunshine happy. I learned big words, I self corrected my speech, I was never any trouble. I didn't complain or sulk. My manners were impeccable. Fortunately, myopia excused me from being the star of the baseball team and tennis court as my mother had been and I loved story books. My one rebellion was a refusal to take piano lessons. Sad, that, as I later learned that my mother, who could play well, would have loved a piano but would not justify buying one just for herself if I were not taking lessons.

By the time I was in my teens, my mother was menopausal, depressed and physically ill. An inspired doctor recommended that she take up a hobby, and my mother pulled herself together, rejected ceramics and dress design and enrolled in what was by now a full fledged university in the city. And she soared. She ended up by taking a second MA, this time in Dante studies, and only stopped after this degree because she had been asked to be a lecturer in the English department. She threw her whole heart into it. Several of my friends took one of her courses and still remember it as a high point of their university life.

And then it all crashed down on her. Her eldest sister killed herself and left her young daughter to my parents to care for. My father had a massive heart attack. And my grandmother became very ill and progressively demented and required more and more care. I was away at University by the time this all happened. And then newly married with a husband whose job kept us 600 miles away. Mother resigned her job, took on her very damaged niece, helped her husband pick up his life again and looked after her mother. By the time this all got squared away she was worn out. 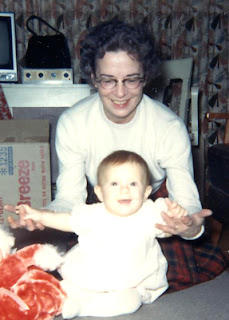 With her first grandchild. Age 56

I wasn't much help. But I did provide her with two grandchildren whom she adored and whose antics and bad grammar and deportment and clothes and shoes provided her with a lot of pleasure. She helped with their projects and essays by mail and phone, bought them lovely surprises, and she and my dad gave them wonderful vacations. She glowed when they did well in school. I wish she had been well enough to appreciate it when the elder daughter graduated first out of her university, earning a Governor General's medal and a scholarship which took her to Cambridge for graduate work. But by then her mind and body were both letting her down and she died shortly thereafter.

I also wish sometimes that she could have been born even ten years years later. Friedan and her peers would have had a strong colleague. She said of herself that her life had not been a waste since out of it had come these remarkable grandchildren. The night elder daughter's daughter was born, I remember looking at the stars and wishing my mother could know that another generation was launched. Her family was so important to her. Almost as important as her beloved English.

I miss her often. I tried to be the daughter she wanted, but she sure was a hard act to follow. On top of everything else, she was always beautiful, everyone she met became her friend and she was cracking jokes about Dostoevsky while wheeling her IV down the hospital corridor a week before she died. Hey mom, if you're listening. Little Stuff is still making an 'ƒ' out of the 'θ' in 'three' but she has a huge vocabulary, she can sing in tune and remember all the words and she's a champ at breaking eggs. And sometimes she reminds me of you.
Posted by MARY G at 10:54:00 am