Grandpa wanted to drive back to the back hundred (100 acre parcel of land; we have three) and cut up some logs and Little Stuff and I went with him. It was a perfect day -- I could describe it, but the pictures tell it all.
We went to Grandpa's woodpiles. He has two 'landings' at the back; 'landings' are small clearings where logs can be stacked and stored before becoming firewood. He and two friends culled a fair sized area here last fall and Grandpa has been cutting up the logs and splitting them all winter as weather permitted. And so the trails to the back are, unusually, ploughed out. We drove back in our little ATV truck (wearing its tire chains) to the first landing, where Grandpa has finished his work. 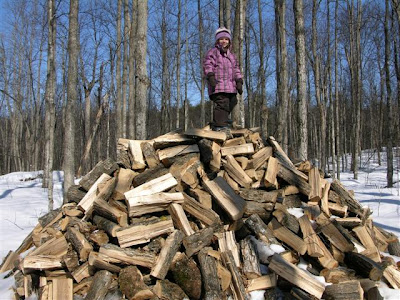 While he sawed up logs at the second landing, Little Stuff and I went for a walk. We found that one of the small streams that runs out of the big beaver flood* at the back of our property had partly opened up and Little Stuff had a wonderful time exploring, splashing and gathering moss while Grama took photographs. 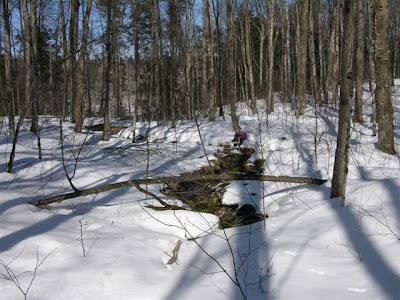 You can see a small pink Little Stuff exploring in this shot; it also shows what our woodland looks like. In the very back is a bit of the bay that sits at upper right in the first of the photos of where we live. Check out the footprints in the foreground. Little Stuff was not sinking at all.
Grama, on the other hand, was. After Little Stuff finished playing in the stream 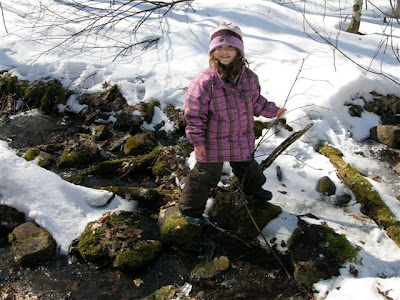 we walked upstream following some fox tracks. She went where the fox had gone. Grama mushed along, far behind, seeking higher ground and easier walking. We went all the way to the back beaver pond, along it and cut straight back, following the sound of Grandpa sawing, to end up at the second landing.
A really big hit was a huge wolf dropping, full of hair from some small animal. Luckily my pockets were so full of pine cones, large and small, by the time we inspected it that there was no room left to bring it along.
Boots, leggings and hat are now all drying over a hot air vent. And Grama is contemplating putting a hot pad on her back.
* The lower of a series of two ponds formed by industrious beavers. This shot shows about a quarter of it. The whole expanse was skatable today. 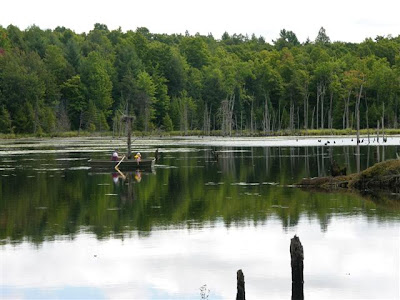 Labels: granddaughter, On where I live, woodpiles